The bay laurel gets a trim!

There comes a time every few years when the bay laurels (Laurus nobilis) need to be trimmed to prevent them from becoming trees. This usually happens to coincide with the need to restock the herb canisters with bay leaves for cooking.

The Mediterranean was once covered in wide-spread laurel forest but as the region became more dry the laurel forest are now only found in the mountains of Turkey.

The dry leaves are used to flavor many Mediterranean dishes during the cooking stage, although, the leaves are removed before eating as they remain sharp even after cooking and can cut the throat or mouth.

I often will drop a leaf in any soup or stew to add the deep flavor that I can only describe as a musky or woody flavor. A few in the cavity of chicken with lemons when you roast is a good use, too.

When they reach about 8 feet or so tall I will remove the tallest limbs down to about 18 inches. This keeps their height in check and also promotes branching.  I also take cuttings to root.

The cuttings are very slow to root and begin new growth. A year is not unusual.

This is the largest bay in my garden which is on the north side of the patio. It is about 10 feet tall and 7 feet wide. It was a cutting from a tree in Morehead City. 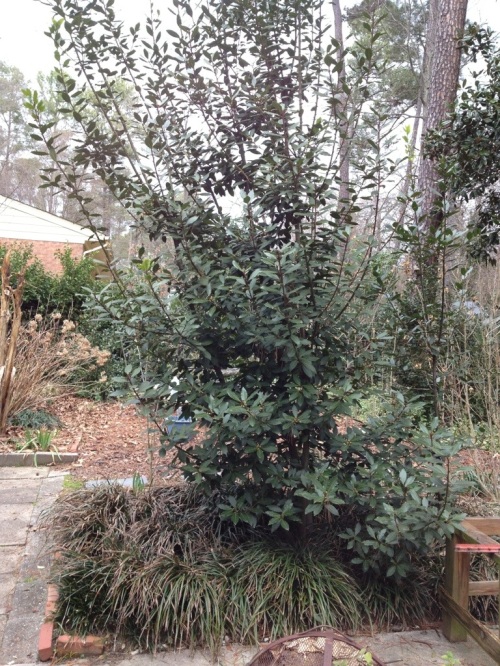 It produces small white flowers every Fall but they appear not to open and I have never seen any type of seed form. The laurel is dioecious which means male and female flower are on separate plants.

The leaves and stems are very fragrant. Even Gus cannot ignore the fragrance. Of course, he has to taste everything. I have to be careful he doesn’t try to swallow the wood as the splinters can become lodged in the throat or stomach. 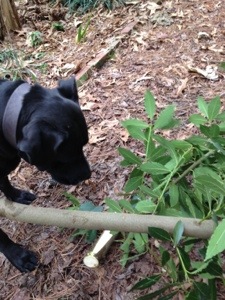 I begin by cutting the limbs off the main trunk.

Then I cut those into shorter cuttings. The lower leaves are removed and saved for the kitchen.

Since there is such a high number of failures with the slow rooting plants I plant the pots heavily. The pots are kept moist during dry weather and placed in a partly shady location. I usually leave them in the pots for two seasons before trying to potting them up individually. 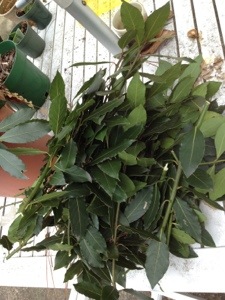 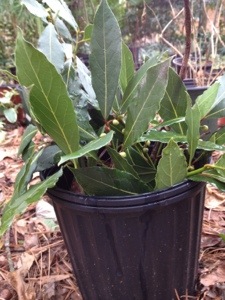 The leaves are dried by spreading them out in pans or baking sheets for a few weeks. Once they are dried you may store them in air tight containers or in paper bags.

They are also used to make wreaths and other seasonal decorations. You can keep bunches of then in closets for the fragrance. They will also stay attached to the stems and can be used for decoration in vases and arrangements.